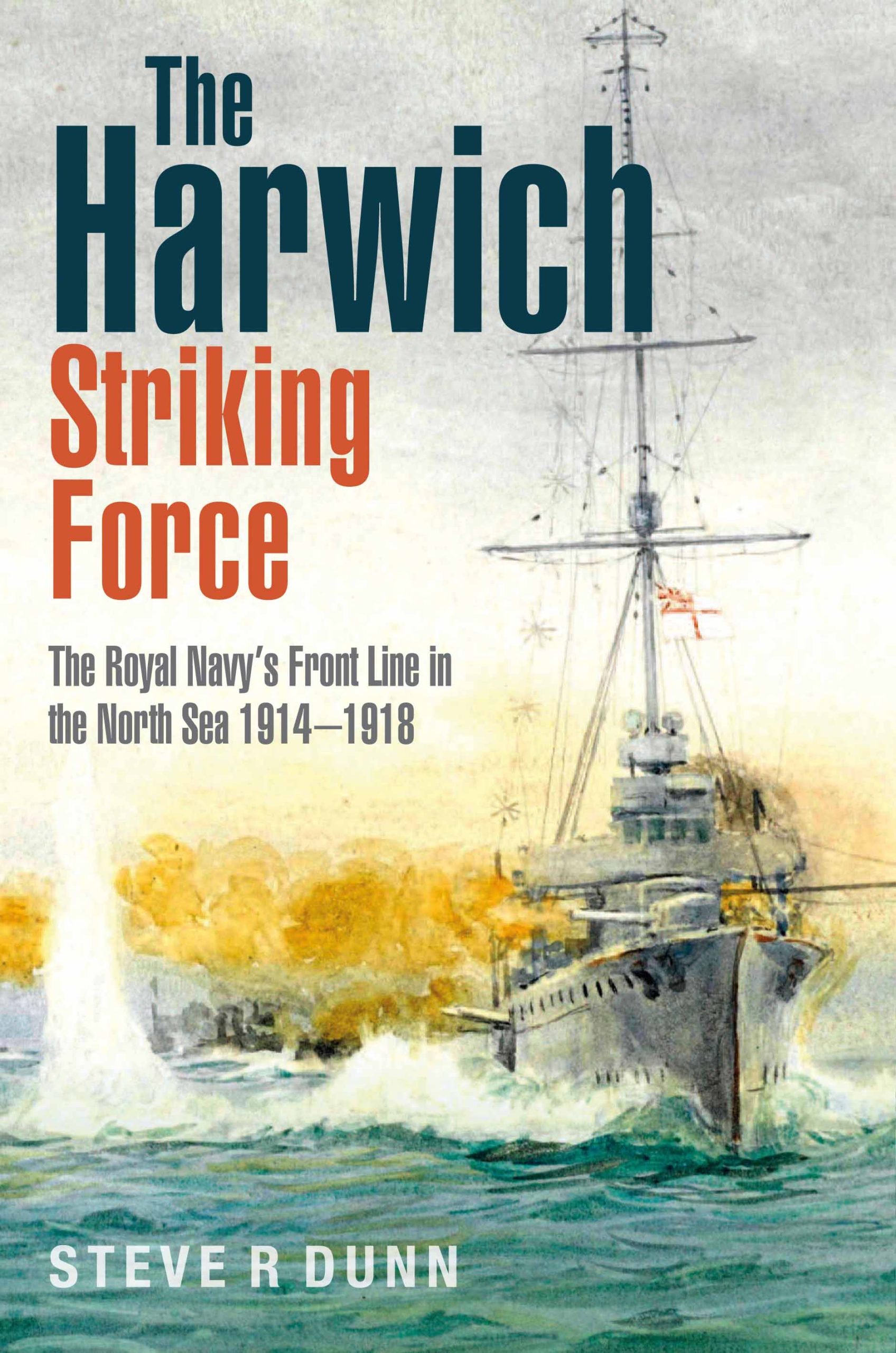 ‘The Harwich Force has made its name and will not be forgotten during the future
annals of history’; so said Rear Admiral Sir Reginald Tyrwhitt on Armistice Day 1918.
But today, that fame has not endured. Yet for the four and half years of the First
World War, the Harwich Striking Force was the Front Line for the Royal Navy, a
force of cruisers and destroyers operating out of the eponymous port and keeping
sovereignty of the seas for Britain and her Allies.

Under a charismatic and aggressive leader, Reginald Yorke Tyrwhitt, affectionately
known for most of the war as Com (T), U-boats, German cruisers, destroyers and
light craft all met their ends at the hands of the Force, as did enemy seaplanes and
Zeppelin airships. The Harwich ships were at sea almost daily throughout the war,
sweeping the seas for an elusive enemy. The Force haunted the German coast and
the Friesian Islands, it pioneered aerial attack from the sea, naval carrier aviation
and combined air/sea operations, hunted for submarines and escorted minelayers in
the North Sea. Officers of the Harwich Force developed the type of hydroplane
vessel known as a coastal motor boat. The Harwich Force fought German cruisers,
destroyers and torpedo boats, took part major naval battles alongside the Grand
Fleet’s battlecruisers and protected merchant ships operating in the dangerous
waters around Denmark, the Netherlands, Germany and Britain, including providing
close escort for the invaluable food convoys from Holland, the ‘Beef Trip’. And yet,
strangely, little has been written about the activities of the Force and less still at book
length.

The narrative also considers the role played by the other Royal Navy formations at
Harwich, the submarines, the Auxiliary minesweeping and patrol vessels, the
aviators and their aircraft at Felixstowe seaplane base and not least, the town of
Harwich itself.

And when the battle was finally won, Tyrwhitt, the Striking Force and Harwich itself
gained further fame when the entirety of the German U-boat fleet was surrendered
there.

Lavishly illustrated, this volume is a testament to the sacrifice, the men and the grit of
the Harwich Force and the key part that they played in the winning of World War
One.

‘I could not put it down. You have done all those brave men a great service’

Letter to the author from Sir Reginald Tyrwhitt, 3rd Baronet, grandson of the Admiral Tyrwhitt who commanded the Harwich Force.

[The Force’s] actions, successes, failures highs and lows are all here and indicate a massive amount of research...The easy flowing text includes a lot of personal accounts and observations, there are many photographs of the men and the vessels and one very good map. This is a well-focussed work and a jolly good read which we highly recommend.

This book is a fitting tribute not just to the men and ships of the Harwich Force but also to its leader Reginald Tyrwhitt who led the Force for the whole of the war and was described by one of the Force Petty Officers as “the finest sailor Britain has produced since Nelson”. A superb read and very highly recommended.

‘I thoroughly enjoyed this book – it is more than a narrative of operations of the Harwich Striking Force. It invites the reader to look beyond the discussion of operations and to consider the nature of activities undertaken, how they evolved initially and into the future’

Steve Dunn has comprehensively in this book encompassed all aspects of the Harwich Force. His thorough research has revealed a fascinating study of its operations during the First World War. Reflections and quotes are included by naval officers who served with the force. Technical characteristics of ships and aircraft are also outlined. ...

The author provides a well-balanced and considered account of Tyrwhitt and the Harwich Force. There are included within the book black and white photographs, appendices, authors notes, bibliography, and index. This concise and engrossing history of the Harwich Force is a valuable welcomed resource. It is also a memorable reminder to the debt that is owed to those who served in the Royal Navy and the cost in human lives to bring about the downfall and defeat of the Imperial German Navy.

Roger Coleman, The Wessex Branch of the Western Front Association

‘The story is complex and diverse but the author shapes the narrative so that the focus glides smoothly from one aspect to another – a tale of individual heroism, wholesale naval battles and skirmishes, involvement of air craft and submarines, coastal bombardments, zeppelins and flying boats’.

'This book is a fascinating and interesting read, well populated with photographs of the ships, the aircraft and notable personnel. There are chapters dedicated to the Auxiliary Force and the work at Felixstowe, and, most interestingly, the effect that the force had on Harwich and its surrounds. Highly recommended'.

‘The book chronicles the battles, bad weather and contradictory orders of the war. It is both informative and readable’.

‘I thoroughly enjoyed this book as I guessed I would, it really is a good read and kept me hooked for a good few days. Most definitely recommended’.

‘Steve Dunn brings the reader his eighth published work for Seaforth. In the view of this reviewer he has maintained his usual excellent standards in terms of the quality and depth of research and the highly readable and engrossing narrative’.

Available from all good booksellers, Amazon and Pen and Sword